Bagpiper: Can you describe to me what Basic Leadership Training is?

Lyn Akermon: “Basic Leadership Training in my opinion is character development. We take cadets from different schools around the local area— Louisville, Southern Indiana—and we mix them all together, they are all strangers. They have to be functional as one, as a unit. We make it stressful. It’s a stressful environment, stressful mentally and physically because we do a lot of physical training in it. The mental aspect is we teach classes, we put them in leadership roles. They all have to try a leadership role during the week. They have to learn each other’s weaknesses, each other’s strengths. To be a good leader you have to be a good follower. But some people have more leadership abilities than others. Basic Leadership Training is, to me, character development. It shows the individual what are my weaknesses what are my strengths? Am I better physically than others? It teaches me about teamwork, comradery, it teaches me how to give certain people tasks. You can’t task just anybody on anything until you know their strengths and weaknesses. So you wouldn’t give somebody a job, in other words, that you knew they were weak in that job and they could not accomplish that job or that mission. So it’s not just about you learning about you, it’s learning about others around you and in life you have to play the hand that you’re dealt. So, Basic Leadership Training teaches you strengths, weaknesses, not just yours, but your teammates and it teaches you how to accomplish goals, or the military calls it accomplish a mission together with what you have at hand. That’s what basic leadership training is.”

“We do it using the military style of training. Physical training, lots of marching. We have team events because we are huge on building teams, uniform inspections, and a lot of it, too, we just have fun events because we teach them that there’s time that you have to work and there’s time that you need to relax and enjoy yourself, too. That’s a lot how the military deals with stress. Everyone is human you’ve got to have some down time.”

BP: Why would you push your cadets to do BLT?

LA: “I don’t do this job to put people in the military. I do this job to make them productive citizens, to make them good citizens. Basically, to teach them that all through life there’s going to be leaders, there’s going to be followers, there’s going to be a lot of stress in your life and the sooner you learn to deal with the stresses of life, the better you can handle the tough situations in anything you do. If you go to college, if you go to the military, if you go to the workforce, family, no matter what happens, you can deal with stress in your life and you have got to learn how to accept it and you have got to learn how to overcome it. And that’s the main reason for leadership training.”

BP: Is there anything else you would like to add?

LA: “I think the most it does for them—it’s a confidence builder and it’s extremely good for those cadets who always doubt themselves. It just shows them that they can overcome obstacles in life. That’s the main thing.” 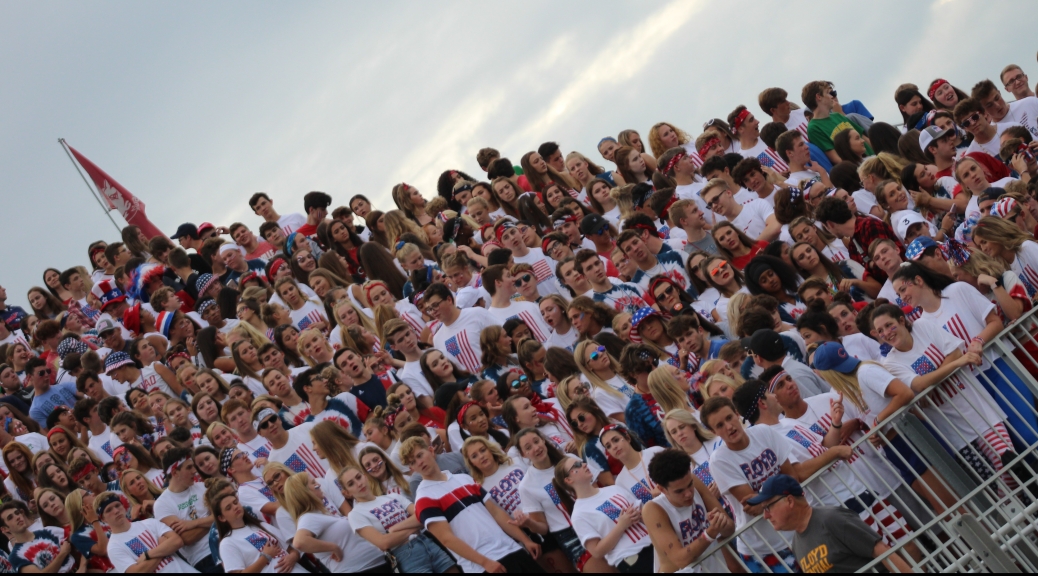 Senior Jon Gunn keeps his grasp on the ball as he is tackled to the ground. Photo by Taylor Watt.

Senior Lucas Moosier tackles an opposing quarterback to defend the 7-0 score in the first quarter. Photo by Taylor Watt.

Seniors Emma King and Olivia Fontan start a cheer to anticipate the next touchdown, as the close score against Providence keeps nerves running high in the second quarter. Photo by Taylor Watt.

The sun sets on a sea of red, white, and blue as the FC student section cheers. Both student sections proudly displayed their American spirit as the players took the field. Photo by Taylor Watt.

The Highlanders gather in the center of the field and chant as the band plays the school song prior to the start of the game. Photo by Taylor Watt. 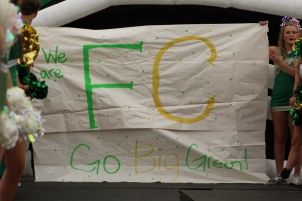 FC cheerleaders and dazzlers line up next to the banner to welcome the Highlanders onto the field before the FC versus Providence game Aug. 24. Photo by Taylor Watt.

Pioneers look on as senior Jacob Quenichet blocks one of their offensive linemen. Photo by Taylor Watt.

FC cheerleaders join the NJROTC unit to spread the American flag across the field during the marching band’s performance of the national anthem. Providence students joined FC students in sporting the theme for the evening: America. Photo by Taylor Watt. 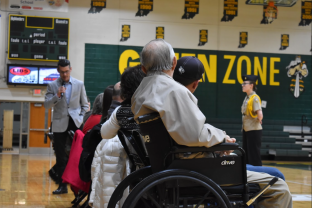 Senior Colton Nash stands in front of his platoon during ROTC inspection. 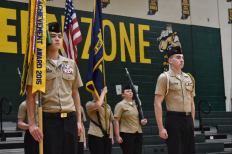 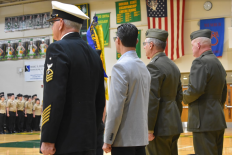 NJROTC Area 3 Commander Joe Hankins (USN, Ret.) inspected the FC Navy JROTC program on Tuesday Feb. 7. Hankins inspection included supply, records, a brief presented by the cadet officers of FC NJROTC, an inspection of each cadet and a ceremony on Tuesday evening. This inspection determines if the FC NJROTC program will be awarded the title of Distinguished Unit for the 2016-17 school year for the second consecutive year. Distinguished Unit is the highest award an NJROTC program can receive, only seven of 41 schools in Area 3 are awarded each year.

Navy JROTC Area 3 Commander Joe Hankins (USN, Ret.) presents a speech regarding his pride for the FC NJROTC program and all other ROTC programs. Photo by Kiley Swain.

The Armed Exhibition Drill Team lined up across the gym with the rest of the company in the bleachers behind them spectating the performance. Photo by Kiley Swain. 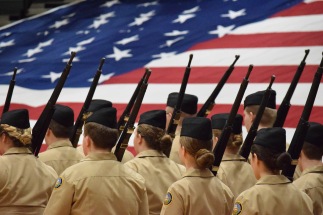 The armed platoon marches to their spot on the gym floor with the rest of the company in tow. Photo by Kiley Swain.

Junior Colton Nash at the front of a dueling rank as part of the FC Unarmed Exhibition Drill Team’s routine. Photo by Robert Wormley.

Unarmed Exhibition Drill team practices prior to the AMI ceremony that will take place later in the evening. Photo by Robert Wormley

FC cadets in the Navy Junior Reserve Officer Training Corps line up in platoons. Dressed in their uniforms, they march and practice each day for the Annual Military Inspection (AMI) on Feb. 7.

The AMI is a big event for the NJROTC program.

There is a lot that the inspection affects when it comes to FC’s NJROTC program. A big part of it is the funding that is given by the Navy.

“It’s important to our NJROTC for many reasons,” said NJROTC Executive Officer senior Katie Hertog. “If you don’t have an Annual Military Inspection you can’t get the funding from the Navy that you need. We wouldn’t be able to have the basement as a whole, we wouldn’t have this classroom, and we wouldn’t have uniforms. We wouldn’t be able to get any new stuff because we didn’t get the inspection. It is also important as a company just to see how well you are working together. It’s not always about the money that’s involved, it’s also about the company as a whole and as a family.”

The military inspection coming up has been held annually since the NJROTC program at FC was created.

“Every year, all programs are required to be inspected annually. In FC’s case, the NJROTC program at FC started in 1994 so an inspection has occurred annually since 1994,” said Commander Joe Hankins, retired U.S. Navy, NJROTC Area Three Manager.

There are two parts of the AMI that will occur today.

The evening ceremony is at 6 p.m. at FC in the Main Gym, where parents and students are invited to come out and watch.

There are specific things that Hankins looks for while he inspects the platoons in each NJROTC program throughout Area 3, the area in which he is in charge. He has a checklist that he follows as he goes through the inspection.

“During the inspection I use a comprehensive checklist,” said Hankins. “This checklist is comprised of multiple sections with each section graded on multiple items. I look for good communication between all concerned. This includes the communication between the school and the program instructors and cadets. I also look for the support given to the program by the school, by the community, by the parents and by the student body.”

Each day the different teams from the NJROTC program prepare themselves for this very day, not just meets and competitions.

“The drill team practices every day, that’s mostly for drill meets, but it’s also for AMI. All the platoons, they practice too during their period. It’s just like drill, they make sure every platoon knows where they’re going. It basically builds their confidence, so they don’t mess up during the actual performance,” said sophomore Ariana Watkins.

Last year during the Annual Military Inspection, NJROTC was awarded Distinguished Unit award. Members of the NJROTC program have already set a goal for themselves this year for the inspection.

“We’re hoping to maintain Distinguished Unit,” said NJROTC cadet commanding officer senior Nick Fulkerson. “We got that last year for the first time in the 23 years of the program. So we look to maintain that. Our rifle team is number one in the Navy. So they’re going down to Navy Nationals in February. The drill team is doing really well, we’re hoping to go down to Navy Nationals for that for the first time as well. So we’re on the right track. A lot of great upper leadership this year. That’s kind of trickling down to the lower class, it should be a great program for the next few years.”