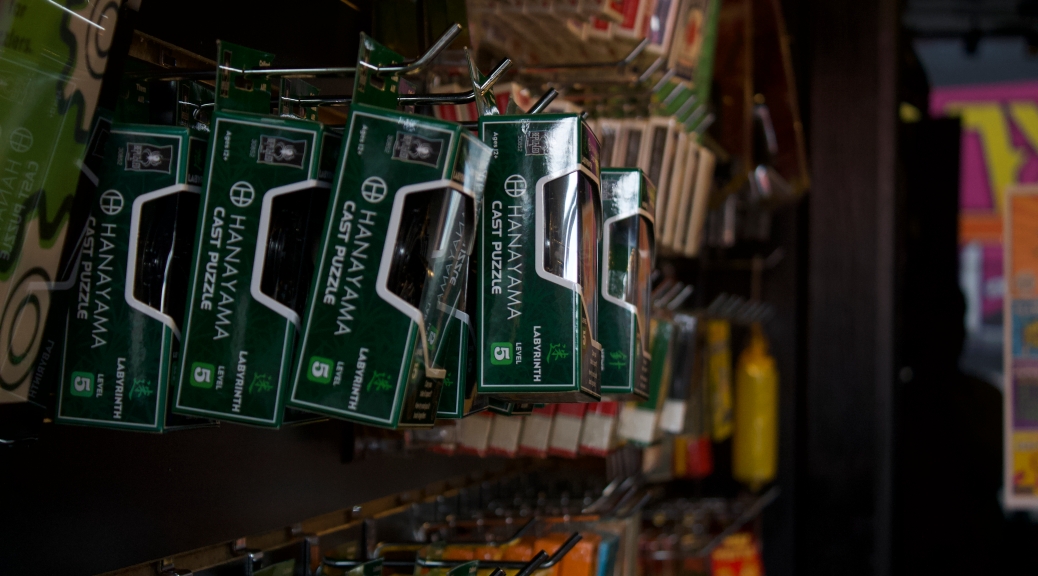 The Carnegie Center for Art and History’s doors open to reveal two rooms on either side of the building, both with hair-related sculptures and paintings for their latest showcase. A gold-leaf-encrusted barber chair sculpture sits elegantly in the center of the leftmost room.

“Usually when we talk about the Underground Railroad exhibit at the Carnegie, what we’re really talking about is two different exhibits. One is really kind of an overview of the history of the Underground Railroad as it happened in New Albany. It’s basically telling the story through various individuals’ voices,” said museum educator Julie Leidner. “The other part of that exhibit is the Lucy Higgs Nichols story, which, rather than being a general overview of the whole community, it’s an overview of an individual’s life.”

“The story of the Underground Railroad is specific to New Albany/Floyd County and this area of the Ohio River,” said museum director Eileen Yanoviak. “We have a really important place in the story of the Underground Railroad because Kentucky was a slave state, Indiana was a free state, and the Ohio River was a bit of a common crossing point for people trying to seek freedom in Canada.”

The Underground Railroad exhibit combines art with history and even includes a film visitors can view as they tour the exhibit. Yanoviak enjoys both the art aspect and the historical aspect of the Carnegie Center. She also admires the work put into revealing and figuring out the history of the community.

“I think what exhibitions do is [take] all this intricate research and primary source documents, a lot of professional information that a historian has that they’ve spent years and years researching, and they translate that information into something that the average person who comes into the museum can see, experience, [and] understand in deeper ways,” said Yanoviak.

Along with having historical exhibits, the Carnegie Center also showcases contemporary art. Public programs and engagement coordinator Al Gorman, who self-identifies as an artist, enjoys the artistry aspect of the museum. He encourages spreading creativity in the community and likes to see different art styles.

“Communities are very expressive and are a part of the times that we live in. We’re so curious about what people do, and there’s so much talent and creativity and art out there,” said Gorman. “What we do is provide a really beautiful showcase to present that. We put it into a form of perspective that will allow you to learn more about it.”

Though the opportunities are not paid, students are still encouraged to volunteer or intern at the museum for a hands-on experience if they wish to work a history-related career.

“We can structure something, it’s essentially like a volunteer, unfortunately, these are not paid internships, but we’re working towards that,” said Gorman. “We also know that if you’re pursuing a college setting, we can provide much more instruction, and you get credit for it. You’ll be able to work in a museum and do what we do. Definitely go out there and volunteer.”

While working at historical buildings, one can meet many different people and witness many different cultures. He or she can also hear other perspectives on individual art pieces.

“My favorite part is meeting new people from all over the world,” said guest relation coordinator Delesha Thomas. “I’ve met people from as far away as England, Ireland, Africa, Tibet, and the many different artists who share their gifts and talents.”

Leidner recommends that students looking to work at a museum or art organization have ideas about what exactly interests them. This can ensure that a student may apply for the best possible position in his or her own interest.

“My recommendation would be to be very clear about what aspect of art that you’re interested in, which you may not know,” said Leidner. “You may just think, ‘I know that I like art,’ or ‘I know that I like history,’ but you may not necessarily want to go and stuff envelopes. If you’re interested in learning about how to teach art, ask if there’s an opportunity to do that. Don’t just be passive.”

The Sophomore Executive Council discusses final preparations for the Winter Ball around the table, as 2022 class president Levi Harrington, writes down what they need. Linens and napkins. The conversation then moves to the number of tickets sold and the number of glow sticks needed for the occasion.

The Winter Ball is the first school dance that has been held for FC students that is not a prom or senior dinner dance, and it is the first that freshmen and sophomores will be able to go to.

“I was talking to my dad, and he had some people at work who were thinking about how much fun they had with their dances in high school. It made me think ‘Wow, I wonder if we have one,’ and it turns out we didn’t. I thought it’d be really cool,” said Harrington.

Sophomore Reece Ausmus, treasurer, said that the dance will be an exciting event for the school and an opportunity for freshmen and sophomores to participate.

“I was pretty excited that we were going to have something for freshmen and sophomores, because the juniors and seniors have prom, but the underclassmen have never really had a dance before,” said Ausmus.

Sophomore Kendall Schindler said that the ticket sales have gone much better than she had anticipated, showing the student body’s excitement.

“I’m pretty surprised by the ticket sales. We’re targeting probably 400, which is amazing, because originally our goal was 200 to get our money back,” said Schindler.

Sophomore vice president Ella Doddridge said that she is not surprised that students are looking forward to the ball.

“We anticipated that a lot of people were going to be excited, because a lot of schools have different dances, and we only have prom and senior dinner dance, so it was good to bring something for the freshmen and sophomores to enjoy,” said Doddridge.

Despite the hard work and enthusiasm that the Executive Council has put into the Winter Ball, not everything has gone according to plan.

“There’s been a lot of meetings where it’s just kind of back and forth. There was a period of time where we couldn’t decide, and a bunch of ideas got thrown out. Once we came together on one idea, we kind of got set in motion,” said Ausmus.

Harrington agreed with Ausmus, and said that the work the Executive Council has put in has helped them power through.

“We’re coming together well. We just all express our ideas of things and how we want to do them, and we come to an agreement on what we should do and talk to other people. We’ve run into some challenges where it lasted a couple weeks while we tried to make a decision, but overall, things are going smoothly,” said Harrington.

While they certainly had their fair share of problems that came with planning the dance, Doddridge said they were able to overcome those obstacles and begin putting their plans into motion.

Schindler said that when she was faced with a problem, she sought advice from those around her, such as math teacher Samantha Poindexter, who runs student council.

“When we hit an obstacle I talked to my mom about it, because she is the PTO president and she has done a lot of these kinds. So I talked to her about it, or I’ve gone to Mrs. Poindexter or talked to the rest of the executives,” said Schindler.

The Executive Council  was not alone in arranging all of the details of the ball. The PTO donated 1000 dollars to the dance, and the FC faculty, while not playing a major part in planning, has helped to guide the Council through their problems.

“Sophomore Exec are the ones planning the dance, so we are on the Winter Ball committee. It’s the four of us, and we are the ones doing all the decision making. Other than us, it’s just the faculty and staff who are helping us, and we’re really thankful for them. We wouldn’t be where we are without them,” said Harrington.

Doddridge also appreciates the work the faculty, such as principal Rob Willman, has done in helping the Executive Council with decisions and planning.

“The faculty has definitely been very helpful. We’ve had a meeting about once a month with a couple teachers and Dr. Willman, and they help get our ideas along and make sure we’re on the right path, so we can succeed at our first year of doing the Winter Ball,” said Doddridge.

Ausmus said that the most fulfilling part of creating and planning the dance will be attending the dance itself.

“My favorite part is probably the idea of going to the dance and getting to know that that’s what I spent my time working on, knowing that I was a part of making all this happen,” said Ausmus.

The Winter Ball was not always the plan when it was first brought to light, Harrington said.

“It originally started as the idea of a homecoming dance, but being so far away from the date of the actual basketball homecoming it was kind of hard to relate them, so we just decided to do [the] Winter Ball so it was totally separate from homecoming,” said Harrington.

Schindler said that if they have another dance next year, it would be closer to the homecoming game and be a homecoming dance.

Doddridge concludes that creating memories is her favorite part of planning the dance, and that is why she would like to do it again.

Doddridge said, “I like doing something that’s important to the school, help kids find something that they might be interested in going to and making those high school memories so that people come together.”

The Winter Ball will be held in the FC front rotunda from 8 to 11 p.m.