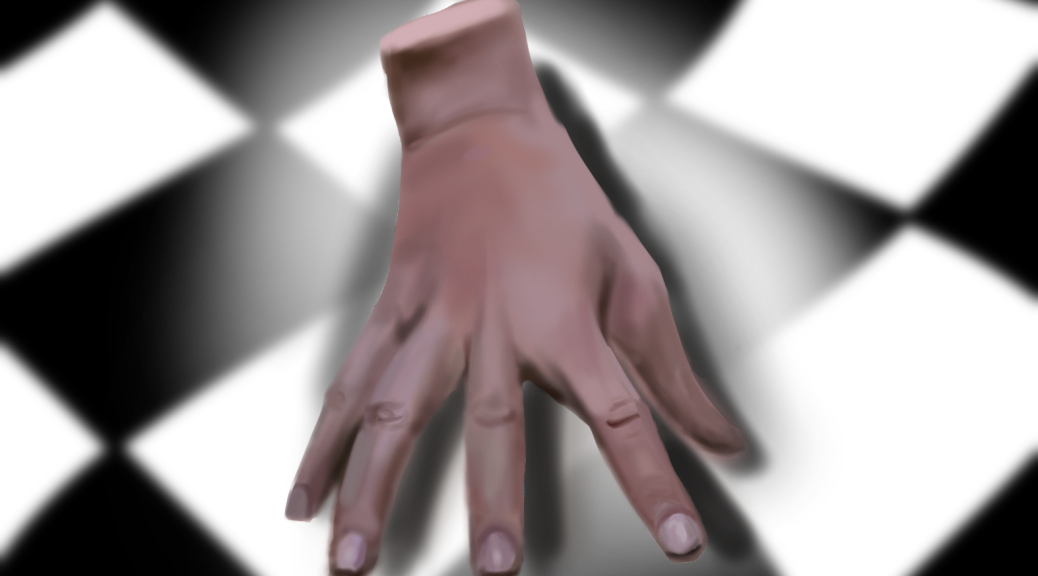 As the iron gates swing open, tons of Addams ancestors flood out. Gomez Addams [New Albany junior Troy Jones] waves them in and a fun dance sequence begins. Whether alive, dead, or undecided, Addams of all ages join in on the festivities.

“The Addams Family” closed this past weekend after its short run at our neighboring high school. The show ran from Feb. 28 to March 8 on Fridays, Saturdays, and Sundays in New Albany’s theatre. This show has a storyline for all ages and is a spooky take on comedy.

Our story begins with our ever so famous Addams family doing what they do best: being hauntingly charismatic. After Wednesday [New Albany senior Mallory Baumann] falls in love with the new boy from Ohio, Lucas [New Albany senior Carter Nevil]. After Gomez promises to keep the engagement of the two under wraps from Morticia [doubled-casted between New Albany junior Maddie Fisher and sophomore Piper Prince] all hell breaks loose.

For starters, this production had a breathtaking set. Sets constructed by New Albany’s [NA] “Dad’s With Tools” and designed by NA theatre director Amy Miller and Patrick Jump were stellar and gave me spooky chills. The home of the Addams is filled with pull away wall pieces to reveal thinks like torture chambers, which are also well designed although they are smaller sets.

The set that was my favorite was definitely outside the Addams’ household from the opening number. The backdrop was gloomily decorated in headstones and dark clouds. With the big iron gates in the corner and front of the stage and the headstones of deceased family members, the set was hauntingly immaculate.

The cast for this production was also astounding. Disclaimer, however, I only saw Prince as Morticia, so I can not speak on behalf of Fisher’s performances. Almost every intermediate family member had something that struck me.

Jones made me laugh and sympathize with Gomez throughout the whole show. Two of my favorite songs he performed during the show “Trapped” and “Happy/Sad.” During the song “Trapped” he sings about how he feels strapped between keeping Wednesday’s secret and lying to his wife which she hates the most. His worried expression and crunched up figure emphasized his stress and fear and made the performance funny along with the hilarious lyrics. As for “Happy/Sad” during the song he tells Wednesday how he is happy but also sad about her growing up. The emotion and onstage chemistry in this song is so raw and beautiful and definitely was a favorite moment of mine.

An audience favorite in this show for sure was Fester [New Albany senior Matt Landon]. With his little fourth wall breaks during random parts of the show, he captured Fester’s strangeness and always got at least one laugh. Another smaller role that was a great laugh was the grandmother [New Albany junior Brayden Marcum]. During the song “Full Disclosure” Marcum pulled his ginormous skirt up to reveal a garter and proceeded to call himself a “cougar.” When I say the audience was crying laughing, I mean it.

One final character I want to mention is, of course, Morticia, the dark queen herself. At the start, I was not sure about Prince’s portrayal of Morticia as I felt she was too sarcastic. Over the course of the show, however, she and her style grew on me. In the end, I loved how Prince played Morticia and am satisfied with her performance.

Another strong area in this show was choreography which was led by Miller. Two dance routines that struck me the most was the dance during “Secrets” and “Tango De Amor.” During “Secrets” the ancestors and Morticia do a dance break that is sublime. The in-sync moves between everyone on stage are satisfying to the eye. In “Tango De Amor” Gomez and Morticia do tiny skits, for example, a matador and bull, between tangoing and it just added to the dance and relationship development in this show.

Overall this show was a huge A+ in my book. The only thing I found wrong with this show was audio errors. At times it was hard to hear the main singer over ensemble members/other family members or the pit playing. Of course, that could be a tech issue or an actor not singing loud enough, but I am not 100 percent sure. But that only happened a handful of times so it was not enough to ruin the show for me.

If you ever have a chance to see any production of “The Addams Family” do not hesitate even a second to buy tickets.

For more of Gavin Corley’s photos go to https://nahsblotter.com/17254/photos/the-addams-family/