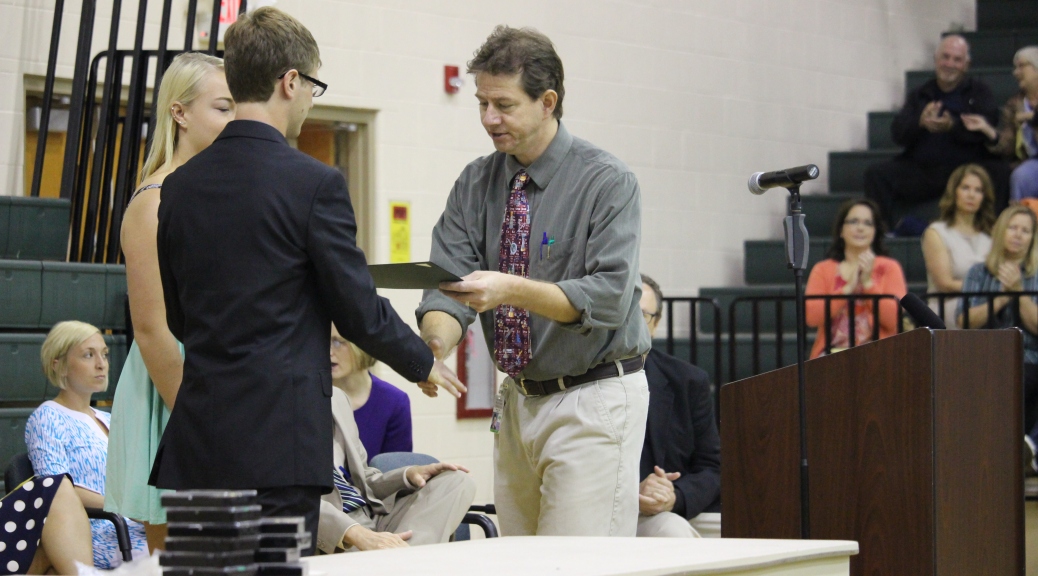 Parents beam and seniors clap as their fellow students march proudly down the aisles through the crowd to receive their awards on Senior Class Day this morning.

Every year on Senior Class Day, department awards are given to a select few seniors. English teacher Karen Mayer-Sebastian explained the basis of the awards.

“Each department decides on a couple of students who exemplify the best of the class in our area. We then award those students a minor amount of money. In some subjects, it is the student who has taken the most classes in that area and has done well. In other subjects, it is just an outstanding student who shows great talent in that area,” said Mayer-Sebastian.

She said that only students who are phenomenal in that subject are eligible to receive the award.

“It is different for each subject, but basically the qualifications are that you are an excellent student who excels in that subject for whatever reason,” said Mayer-Sebastian.

Each department grants these awards to students, but only a few give scholarships to those who have the privilege to receive them.

“I don’t know that necessarily every department gives money. I know that at least the way it used to be with French, they would use some French Club money to award scholarships to seniors,” said math teacher Kim Haley. “A lot of times, for math at least, we try to award the people that are at the higher levels. I don’t know that there’s a certain amount. I think like normally, two or three. It just kind of depends on how many viable candidates there are.”

Mayer-Sebastian explained who in each department selected the recipient of the award.

“Sometimes it is the department chair or the teacher of the highest level of course that the subject offers. Other times the department will collaborate on the decision,” said Mayer-Sebastian.

She discussed what it means to receive an award and why it is such an accolade.

“This means that the teachers of this subject believe that a student is exceptional in that field. It means that we think the student is outstanding,” said Mayer-Sebastian.

Haley said that she believes the award, whether paper or monetary, is a privilege to receive.